I don’t feel strongly about following certain teachers or teachings (other than the Bible itself), but found this very interesting.

Oh, say can you see by the dawn’s early light
What so proudly we hailed at the twilight’s last gleaming?
Whose broad stripes and bright stars through the perilous fight,
O’er the ramparts we watched were so gallantly streaming?
And the rocket’s red glare, the bombs bursting in air,
Gave proof through the night that our flag was still there.
Oh, say does that star-spangled banner yet wave
O’er the land of the free and the home of the brave?

On the shore, dimly seen through the mists of the deep,
Where the foe’s haughty host in dread silence reposes,
What is that which the breeze, o’er the towering steep,
As it fitfully blows, half conceals, half discloses?
Now it catches the gleam of the morning’s first beam,
In full glory reflected now shines in the stream:
‘Tis the star-spangled banner! Oh long may it wave
O’er the land of the free and the home of the brave!

And where is that band who so vauntingly swore
That the havoc of war and the battle’s confusion,
A home and a country should leave us no more!
Their blood has washed out their foul footsteps’ pollution.
No refuge could save the hireling and slave
From the terror of flight, or the gloom of the grave:
And the star-spangled banner in triumph doth wave
O’er the land of the free and the home of the brave!

Oh! thus be it ever, when freemen shall stand
Between their loved home and the war’s desolation!
Blest with victory and peace, may the heav’n rescued land
Praise the Power that hath made and preserved us a nation.
Then conquer we must, when our cause it is just,
And this be our motto: “In God is our trust.”
And the star-spangled banner in triumph shall wave
O’er the land of the free and the home of the brave!

The Boy Scouts Know It.

In an essay on how to help others and yourself by being more proactive when worry hits, The White Hot Truth is a little painful, but I needed to read something like that today.

When I worried about rejection and how I may have unwittingly offended someone. Again. I worry about lots of things, and don’t even realize that it is worry, but this has put a little perspective on it.

I know. A new look for the blog… will she ever make up her mind? Yes, this is the last change for awhile. I hope it loads quicker for you. It is hard to make changes when the risks are that the next choice will be worse than what you now have. Life is full of such fears and risks. It can be small or it can be a major thing like moving to a new locality, but change is full of hopes and fears.

I don’t do well with the big sort of changes, although as you see on the blog, I ‘m comfortable with the smaller ones. Too comfortable some might say. The minutiae of life is where I putter around. But like a talk I listened to on the Third Tribe podcast… some changes just don’t matter that much (like changing your font, no), while others make an important difference (improving usability, yes). That was a man speaking from a business perspective in remarks about the look of a website. The artistic perspective is very different from a business one … and that is largely the one I have taken in life. Whether this font or that, this color combination or a different one…. choices choices.

It has me thinking about the balance of perspectives. My present pastor loves to say that we need each other, in all our diversity. Today’s musings seem to support that idea. I tend to believe it, too, and wonder why so many of our choices advocates the very opposite. So much so that there is old cliches about “birds of a feather”. Our tendency is to clique together, and push into molds that we and our familiars are comfortable with. If diversity is healthy, why don’t we want to be made well?

I have some real posts coming up, but thought I would float this idea by while remarking about the new look for this blog. Do you make room for personalities, cultures, talents different than your own? Do you give others a chance, or are you only in tune with your own tribe? Just wondering.

This would make a great scene for a comedy- like the deer in “Tommy Boys” car.

Scientists said these seemingly suicidal lizards are a result of South Florida’s record cold weather. Iguanas prefer temperatures in the 80s and 90s. With Wednesday morning’s temperatures at around 35 degrees, a handful of lifeless lizards hung from branches and fell to the ground.

While these iguanas appeared dead, experts said they are not. When temperatures drop below 40 degrees, iguanas go into a type of hibernation in which their bodies essentially turn off, only allowing the heart to pump blood. When the temperature rises above 40 degrees again, the iguanas are revived.

“It’s almost like they go totally to sleep. Generally speaking, if it warms up afterwards, they can recover,” said Ron Magill of Miami Metrozoo.

According to Magill, the nonnative lizard was first introduced to Florida by careless pet owners and has become one of the state’s most invasive species. While Florida has similar weather to the iguanas’ native home of South America, it is clearly not identical.

Magill expects most of the iguanas to survive. While the lizards’ comatose state provides a perfect opportunity to reign in the invasive species, Magill had a warning.

“I knew of a gentleman who was collecting them off the street and throwing them in the back of his station wagon, and all of a sudden these things are coming alive, crawling on his back and almost caused a wreck,” Magill said.

I can’t tell you that.
But, I can tell you where the word describing such things came from. Copyblogger tells the story:

Richard Dawkins, an evolutionary biologist, coined a term that demonstrates the natural selection process for ideas.

He called an idea that spreads from brain to brain a meme. You may have heard of those.

Dawkin’s insight about the way ideas spread sprang from the intersection of genetics, social psychology, and cognitive science.

No fan of Dawkins here… but his application in growth of ideas does give something useful. You guys probably already knew this, but I had always wondered about where the idea of memes came from…turns out it was an idea about ideas.

All those economic numbers get confusing. Some insight on why the stock market is going up when everyone knows the economy is still in the pits.

…although I hold doubts he’ll see it… it is for him.

Hope you like the video. Hope you do something good for someone today, because what goes around, comes around eventually.

U2 – I’ll Go Crazy If I Don’t Go Crazy Tonight from David OReilly on Vimeo.

That phrase, “You don’t know me”, when said with the right inflection has become an indictment. It draws a line of exclusion with an accusation. If we had been important we would have known, if you were important to us we would have granted access to our true selves.

Jeremiah 1:5
“Before I formed you in the womb I knew you, before you were born I set you apart; I appointed you as a prophet to the nations.”

There is someone who knew you, and from whom nothing is hidden.

God knows who you are.

But do you know who God is?

Then they asked him, “Where is your father?”

If you are reading this, there is still time to find out.

Different in the sense that I haven’t blogged here about stuff I do, lately. But I have pictures of men in skirts… what more could you want?

This is the year I drum up some interest in things Celtic, literally perhaps because while I attended the annual Dublin Ohio Irish Festival I bought another bodhrán. This one was a more moderate size than my original purchase… and I’ll likely have more to say about that at another time. Right now, I feel like talking about the festival.

First, it has grown into a monster of an event. Years ago, when we first attended (pretty much every year) it was a friendly family size festival. Now it rivals the state fair with its sea of people in an expanded size park.

I didn’t like the crowds so much- I never do- but there were interesting exhibits, and the Celtic music was as lively and enjoyable as ever.

One thing about the music, though. I am of Hungarian heritage and grew up listening to Gypsy violin music…so I know it when I hear it, and the main “Celtic Rock” group was definitely of the Eastern European genre. Sure enough, they unveiled those facts halfway through their set when introducing themselves and then “transporting us back to Bulgaria”. Whatever. Much of the music from Russia, Romania, Hungary, Bulgaria, etc. has enough similar flavor-rather like cabbage rolls- that you recognize its common elements. They have nuances of the region, but basically you will have the basic ingredients that those of us of that background all love. it was good music, just not Irish or Scottish. So with the violins, Irish traditional music has its own flavor despite the world music meanderings of the Chieftains and ensuing Celtic Fusion. The group performing on the main stage was called ‘Scythian‘, and the lead violinist was exceptional- the second player was very good too. Mad Gypsy playing, I’ll tell you (not to say they are Gypsies, just the music style). When I was in Hungary, the Gypsy violinists roam streets and tourist attractions and play for tips. Just as exceptionally talented as any violinist in a concert hall…but I have digressed.

What you really want are the men in kilts, don’t you? The Irish Festival is the one place where the kilt is common. Now they have “American kilts”, that was new to my eyes. a men’s skirt made of plain broadcloth or camouflage pattern. 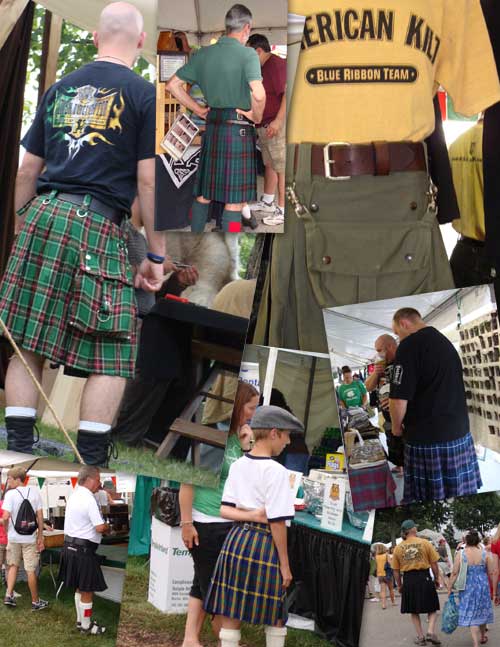 On another note, my Celtic page, which has lain dormant for so long is going to move to my Reflecting Pool website this fall. Geocities is closing and I thought I would refurbish the page and keep it alive.