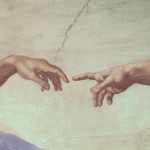 I began with Prayer: Getting To Know God because that is the prayer that begins the pattern of the Our Father prayer. We come to know Who God is, The Creator, the Father of All, now Our Father in a special redemptive way through Christ… we enter into a relationship of finding out His will and identifying our petitions in that framework.

We find that most of our beginning with God is as a petitioner. We recognize our needs and bring these things to Him in prayer. It is not until we have moved past our own needs that we begin to enter intercession for others. And this is the next type of prayer I wanted to examine.

An intercessor acts as an intermediary between two conflicting parties. The apex of mediation and intercession is always The Lord Jesus Christ, but before his ministry there have been others recorded: Moses, Jeremiah, it seems as though all the great prophets had episodes of intercession for wayward and needy people. People caught in circumstances or in trouble of their own making, it didn’t seem to matter what the cause… the intercession was made to reconcile them to God’s good grace and mercy. And it continues on….

The point made in this passage is that you do not need to be anyone ‘special’, but if you are a sincere person of prayer, who has that covenant relationship that imputes righteousness…. you hold sway with God.

And that is what intercession is, like the time Abraham interceded for the evil cities of Sodom and Gomorrah, continually sounding out God for how much it would take to receive reprieve from destruction:

“2 Then the men turned away from there and went toward Sodom, but Abraham still stood before the LORD. 23 And Abraham came near and said, “Would You also destroy the righteous with the wicked?”
……he said, “Let not the Lord be angry, and I will speak but once more: Suppose ten should be found there?”
And He said, “I will not destroy it for the sake of ten.” 33 So the LORD went His way as soon as He had finished speaking with Abraham; and Abraham returned to his place.”

One might notice something a bit different about intercessory prayer. It has something of a more formalized relationship that comes from familiarity with God, His will and His ways. No special words, no man made boundaries, but the quality of the character and the fervent identification can and do make a difference.

Elijah’s nature was no different, but he was a man following his calling who cared very much for the things of God. This component made part of the effectiveness of his prayers. It is always the decision of God in the answer, but the person who importunes is the catalyst, (and intercession is importuning for others) and gains the ear of God. That this is an integral portion of the Christian’s life is indicative of the real importance that God has given man in the scheme of things.

You matter, and your prayers matter. Prayer will make all the difference in many events and peoples lives. Because that is how God works, what He has chosen.

Sometimes I have held the idea that intercession is a calling. I would compare this with the idea of the different types of faith. On the one hand, all Christians are called to make intercession:

1 Therefore I exhort first of all that supplications, prayers, intercessions, and giving of thanks be made for all men, 2 for kings and all who are in authority, that we may lead a quiet and peaceable life in all godliness and reverence. 3 For this is good and acceptable in the sight of God our Savior…

and yet, some by their given nature and by particular spiritual gifts are more equipped to intercede on a regular basis. Perhaps it simply works out that way, but it would appear that this qualifies under the category of
“7 But to each one of us grace was given according to the measure of Christ’s gift. 8 Therefore He says:
“When He ascended on high,
He led captivity captive,
And gave gifts to men”
I couldn’t prove this as a particular calling, although it has some support in traditional understanding, but that we should engage in intercession is plain.

And while there are disputes over a particular scripture on it, the evidence is clear for group intercession being especially effective. It is amazing how God answers prayers of people who agree together on a request in prayer. I have seen this first hand, and it is laced throughout the scriptures, from the prayers of doomed Nineveh to prayers of the Jews at Esther’s request to the prayers for Peter in the New Testament: “Peter had come to himself, he said, “Now I know for certain that the Lord has sent His angel, and has delivered me from the hand of Herod and from all the expectation of the Jewish people.”
12 So, when he had considered this, he came to the house of Mary, the mother of John whose surname was Mark, where many were gathered together praying. ”

Again, as with all prayer, you must experience it and actually pray to see its reality. The time to pray is now, always now.
Next, Spiritual Warfare
If you wish to know more of my personal thoughts on this topic of intercession…. keep reading

Interceding in prayer is taking on others burdens, their problems, their mistakes, or their inabilities. I find it is very taxing, but perhaps that is because I have strong identifications with those I pray for. This is my nature and I don’t take any credit for it ( or blame). It is also what I believe has made me effective in prayer. Fervency has come from praying for someone’s child as though it were my child, for example.

However, it is never my praying or my fervency that creates the answer, though, it is always God who answers… and more than a few times I prayed almost off-hand and had answers to prayer. God likes to keep us wondering is how I would joke about it, but seriously I would simply say we never really understand God. Not completely. He thus always surprises us.

But we do know that He has made many requests for us to pray and made many promises. If we were only a bit less remiss it would up-end our world. The line between belief and unbelief is asking in prayer, I think. Simply start asking.

I think it is just that simple: we have not because we ask not.

Praying with other people has its funny moments… we are very different from one another and we view things from perspectives that are sometimes hard for others to understand. Yet, it seems if we get beyond those things, praying together binds us in a way that supersedes the barriers of our differences. I think this is no small effect of intercessions being made as a group.

Because interceding can be both exciting and draining, it is not a thing I any longer offer lightly. I want two things from my offers to pray for others: one is to be faithful in it- empty offers to pray are worse than useless; and two, I want to fulfill the plan of God for my life. He has particular uses for me, and He gives the grace that upholds those who do His will. We can wear out our resources in trying to fix the world and that is true in our prayer life as well.

Our flesh is really nothing, friends, it just plain wears out. So in all this the point of intercession segues back to the person of God: Thy Will be done, Thy Kingdom come. Amen.

There is world of hurt out there, we are one person each, but each of us can extend the hand of God through our prayers to Him. A circle of love and life.

One of the things I would be careful of in intercession is praying for your own will in a matter in the prideful illusion that you manipulate situations or could wish evil on someone. Prayer that serves God blesses. Even in judgments, God’s will for people is for their good. Judgment comes, I don’t believe we have to pray for it… what is needed is mercy and grace. We have the Holy Spirit to guide us in this, as in all endeavors. In fact, we probably see the work of the Holy Spirit the most in our times of prayer. There is a real sense and direction that God gives us in intercession. I’d say, wait for that, expect it.